Since ancient times ceramics are one of the most used and appreciated materials by man. A sign of beauty and elegance, ceramic is able to give that classy touch to those who own it and show them off.

One of the most famous and internationally appreciated ceramics is the Caltagirone ceramics. On the other hand, we know that Made in Italy has always been a great success for first-class raw materials and for the love and dedication that our artists put in every product. They know it well in Caltagirone, a charming Sicilian town close to Iblei mountains, defined by many as the capital of ceramics and with rightful reasons; the secret of its fame is thanks to its artisans, to whom it is attributed a single enormous merit: safeguard a millenary tradition, passing it from one generation to another until today, up to us, who are here to admire something more than art… poetry. The strong bond between the ceramic and the city can be guessed from the name that the first Arab explorer gave it: Qalat Al Giran, or castle of jars. It was they who greatly enriched the city by bringing in the art of majolica. Nevertheless, there are much older testimonies which go back to the Neolithic, in a period in which man discovered agriculture and the need to create objects to preserve the products of their fields. Yes, but why exactly in the same area where Caltagirone stands today? There is a very specific reason: this region is rich in clay quarries (the raw material from which ceramics are made). The clay itself is of excellent quality, ready to be used almost immediately without too many purification processes. The other reason that made Caltagirone the ideal place for the manufacturing of ceramics are the numerous woods that surround it, from which the first ceramists obtained the wood to be used for the long cooking process. A further step forward in the history of ceramics art is the introduction of lathe by Greeks, but it will be only Arabs, centuries later, to grasp the ceramist vocation of the city which will transform it from necessity to art. Until then, in fact, ceramic artifacts were – as we would say today – rough, tools that fulfilled a purpose, a need and had little or no artistic value. But with the arrival of the Arabs things changed: they started to look for aesthetics in addition to practicality, making those raw objects something beautiful that can leave you speechless, an art increasingly sought after, until it becomes a luxury not for everyone. During the tenth century the lines are enriched, referring to the Egyptian and Persian tradition with their typical copper green and orange yellow colors, geometric patterns or plants depicting small animals; the basins show large stretches decorated with braids that during the ‘300 become narrower under the Aragonese influence, then assuming etallic reflections and floral patterns in blue under the Catalan influence, that less than two centuries later will leave room for choices inspired by renaissance.

The current Caltagirone is full of testimonies that show how much its ceramics are an integral part of its own being: decorated lampposts, pine cones, vases decorated with effigies of mythological creatures that leads you to the park, plenty of statues, fountains, panels, terracotta ornaments of all kinds able to capture even the most distracted looks. On the top of the hill, the music stage, a sparkling glass structure and tiles with a thousand reflections on which rest the wings of the Banner Eagle, symbol of the city. Thanks to the advent of industry in the early ‘900, the ceramics of Caltagirone had a new impulse that made it known to a wider audience. Symbol of this new rebirth of the city is undoubtedly the staircase of Santa Maria del Monte, redesigned in 1956: 142 rows of polychrome majolica, rich in geometric patterns and figures drawn fro the local ceramic tradition, set on the risers of the steps in lava stone that leads to the ancient church matrix of S. Maria del Monte. Today, Caltagirone is divided between crafts and small manufacturing industry. The raw material is no longer obtained from ancient local deposits, but experience and imagination that artisans put in the artistic manufacturing of clay is always the same. Each product is the result of a scrupulous and original design of the shapes and an accurate and careful molding, obtained exclusively according to ancient tradition with water, small tools and lathes. 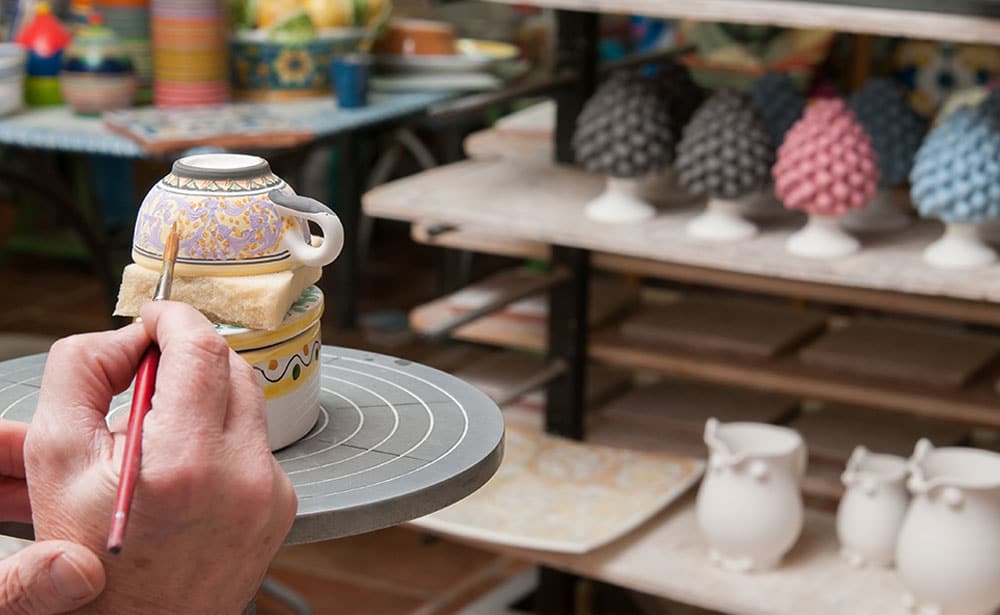 Have you ever wondered how ceramic artifact come to life in Caltagirone? You can say that tradition blends harmoniously with technology without losing its vintage style. It all begins with the skilled hands of artisans, whom give the clay complex geometric shapes, all in a few minutes and almost make it look easy. Then the models are fixed with a first cooking at a temperature of almost 1000 degrees. Each piece in then cooled to room temperature and then glazed and decorated. Often, in memory of the old days, they prefer to add traditional colors. Then they move onto the second and final cooking that will churn out the final work, ready to be made available to a public in love with beauty.

Included in the UNESCO world heritage list in 2003, Caltagirone has been producing ceramics for over 4000 years, through small and even smaller craft enterprises. Today more than 163 companies are active in this sector.
In 1993 local production obtained the DPO brand and a prominent position in the Italian Association Città della Ceramica.
A strong impulse to the millenary artistic tradition of the city of jars is given by the modern commercial system.
Today as never before, thanks to the advent of the Internet and e-commerce, Caltagirone ceramics has an increasingly large showcase, open almost for the whole world, an extra march in the challenges of the global market; e-commerce that are committed to promoting the excellence of Made in Italy in the world, especially the specialties of the beautiful Sicily, among which, in addition to many gastronomic products, there are the ceramics of Caltagirone: sinuous vases, furnishing accessories such as spice holders, dish sets, real works of art that are almost always present in our homes and especially in the kitchen, witnessing the intrinsic love between Italians and ceramic artifacts.
This story, like many other in Sicily, speaks of sun and soil; but of a sun that inflames the hues and a soil that shapes the deeds and emotions of artists, the love in the hands of skilled craftsmen, the hopes of young students, the wonder of those who, like us, admire a unique treasure in this world: the timeless success of Caltagirone ceramics. 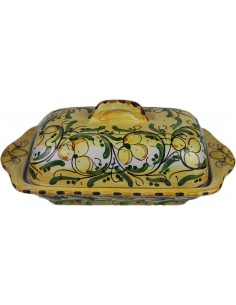 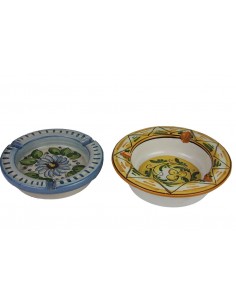 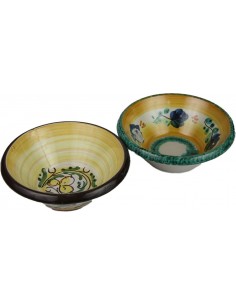