The objects made of Caltagirone ceramic represent an example of Italian excellence, which contributed to introduce Sicily and its traditions throughout the world over the years. Colorful and refined with care, those objects hold within themselves stories and folklore of the island and are capable of transmitting the craftsmanship of those who produced them over the years, thanks to their refinement and high quality techniques with which they are made. Two of the most known and recurring motifs are indeed the moor’s head and the cone. Used to produce a huge variety of objects and appreciated due to they strong symbolic meaning, moor’s heads and cones made of Caltagirone ceramic are already adorning thousands of houses in Italy and abroad.

Caltagirone Ceramic: How are They Made?

Theproduction of ceramic objects within the town called Calatino still follows ancient techniques, handed down cfraftsman generation after generation:
•    Turning and shaping
•    Drying and baking
•    Enameling
•    Decoration
•    Second baking
Fist of all, it is necessary to shape the object you want to make. The turning phase followed by the shaping allows you to make exactly the first model of the object you want to create, more refined and detailed little by little. A moor’s head or a cone, a vase or an ornament, that’s when the expert hand of the craftsman shape the product.
Then there’s a “rest” phase, in which the ceramic is left to dry and is baked at a later time. It is indeed a crucial moment to make the object acquire solidity and firmness. When the first baking is done the objects are enameled, in other words covered with a layer of glaze that will be the base for the decorations.
A Typical enameling of Caltagirone Ceramic is the white one. All other colors are added in a second phase, the decorative one. The ceramics are taken over by specialized artisans and the famous colorful decoration are added over the white layer of glaze, those that make these objects so renowned and recognizable all over the world. Every artisan has his own characteristic feature, his own favorite themes or colors to use in the decoration.
However, the style that unites them all is unique and identifiable immediately. At last, the object are baked a second time to acquire their characteristic sparkling. This is a delicate phase on which depends the final result of the entir
e process.

Moor’s Head: their Story and Relevance

Moor’shead represents one of the most famous examples of Caltagirone ceramics, a decorative motif which made this handicraft production center so famous all over the world. The moor’s head is a recurring element in Sicilian culture and it has its roots right into the story of the island.
The legend narrates that about a thousand of years ago, when Sicily was under the Arabian domination, a young moor fell in love with a young girl in Palermo. All he had to do was glace at her to do so and to decide to immediately declare his love. The young girl was used to pass her time at home and loved to take care of her aromatic plants on the balcony. When the moor declared his love for her, the young girl reciprocated with passion at the height of happiness.
But soon enough her happiness vanished, as the girl realized that her lover which exclusively belonged to her will soon go back in Arabia, where his wife waited for him. Blinded by jealousy and mad at the idea that the young man could not be completely hers, the young girl killed him cutting off his head.
His head was used then by the girl to hold a basil plant on her balcony, watered bay the several tears of the young girl. In front of the luxuriant basil plant (furthermore a plant that hold a huge symbolic meaning), her neighbours wished to have something similar in their home.
That’s how moor’s heads were made (fake this time!), thus starting the long tradition that through centuries has come to us (fortunately with less macabre results).

More thanbeing profoundly bound to Sicily history and Arab domination that forged some of its distinctive traits in its culture and traditions.
How it is used? The first fundamental use of moor’s head is suggested directly fro the legend that narrates its origins. Caltagirone ceramic moor’s heads in fact are largely used to produce colorful vases. Like the neighbours and passer-by in Palermo in the legend, there are many who have appreciated the beauty and refinement of these vases over the decades and have chosen to place them in their homes. In this case fortunately, it’s possible to have vases in the shape of a moor’s head in a much less grim and tragic way than in the legend!
The moor’s heads are also widely used to make knick-knacks and objects for home furnishing, always with decorative purposes.
These are objects that in terms of shape and size can recall vases but, obviously, do not have cavities to house the plants. They are much appreciated for their refinement, able to bring light and vitality to any environment thanks to the colorful decorations that characterize them. 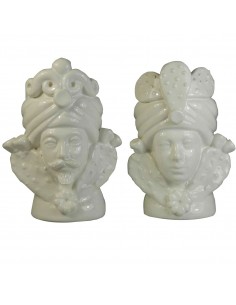